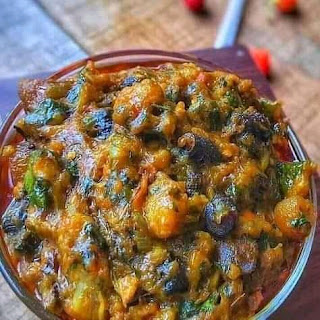 Ikoko has been considered by many to be the traditional food of the Arochukwu people, though the food was copied from their Akwa Ibom Neighbouring community but it has dominated the entire Arochukwu Community as it is now regarded and rated as the Arochukwu Traditional Food.

The Aro people have some other native foods such as, Ukam, Une, Eterete Ji, Igbugbu Achicha and others but the Ikoko native food has been rated as the most eaten and recognized food of the Aro people.

The Ikoko Native food of the Aro people is not a food you can cook like other native foods in Arochukwu, cooking of ikoko requires serious preparation and readiness before one can embark on cooking such respected food in Arochukwu.

After getting these ingredients, you will come home to plan for the cooking, the truth remains that one person cooking Ikoko can be stressful as it requires a lot of kitchen works and preparations.

If you need the best off from your ikoko preparation, try as much as possible to add extra one person to yourself, as it will help ease you some stress.

for now i will stop here, but it is worthy to note that the Arochukwu Traditional Food is Ikoko.

Click The Next News To Know How To Cook Ikoko (Wateryam)