Mr. Olugu Wisdom Kalu The Registration Officer of the Independent National Electoral Commission (INEC) Arochukwu L.G.A has disclosed that there will be no room for vote buying or snatching of ballot paper come 2023 General Election. Mr. Olugu told Aro Okeigbo Blog that the ongoing nationwide continuous voter registration (CVR) is to help eligible candidates who are up to the age of 18 enrol in the voting process and to also help those who have lost their PVC regain access to cast their vote during elections.

The physical voter registration which began on July 26 at the INEC office located in the Arochukwu L.G.A, provides the indigenes of Arochukwu Local Government who initiate the registration process online and those who prefer to register in-person, the opportunity to complete the process in the LGA Secretariat.

According to a statement by Mr. Olugu, Arochukwu INEC Registration Officer and chairman, information and voter education committee, disclosed that through the ongoing online/physical voter registration exercise Arochukwu L.G.A has been able to stand out among other Local Government in Abia state as it has helped boost our voting strength in Local, State and Federal Government Level.

READ ALSO: About The Arochukwu Waterfall and 79 Steps

He added that Arochukwu L.G.A was able to achieve this through the help of Hon. Mike Ukoha, the member representing Arochukwu State constituency who through his continuous sensitization and support has helped the occupants of Arochukwu L.G.A to see it necessary and enroll on the voting process. Mr. Olugu disclossed that Hon. Mike Ukoha has gone miles to ensure that the indigenes of Aro L.G.A gets involved in the voting process as he was able to achieve the rotation of the Registration process from the Aro Local Government headquarters to Communities, Clans and Kindred’s that make up Aro L.G.A 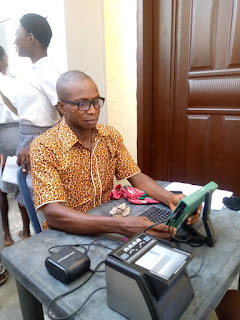 The INEC officer pointed out some problems they face during Registration which include, poor network coverage, non compliance of registrars, unseriousness of registrars during passport capturing, the ability of the finger print scanner to capture registrar finger print due to some body temperature issues, poor sensitization by town union presidents to their indigenes, he used Abam as an example of community that did not turn up during the Registration process.

According to the INEC officer, one of the reason why Arochukwu/Ohafia road haven’t been constructed  is because of the poor voting strength of Aro L.G.A which have helped in detachment of  attention of politicians from Arochukwu L.G.A hence they can not really help actualize their leadership/power interest during election.

Mr. Olugu charged other political stakeholders to emulate the giant step of Honourable Mike Ukoha to ensure that people enroll on the Voter Registration process, and beseeched  town union presidents to always take voter card registration process serious and inform their people at home to go out and register.

Mr. Olugu charged every Arochukwu L.G.A indigen to register anywhere he/she finds himself but include Arochukwu as his/her place of Origin then come to the INEC L.G.A office to pick their PVC anytime they comes home during festive period.

The commissioner charged everyone to participate in the Registration process as there will be no room for vote buying this time around.

The below are days mapped out by INEC to enroll indigenes of Arochukwu communities in the voting processes.