Dr. Nto Hails Ikpeazu As he set to Pay ASCETA One Year Salary 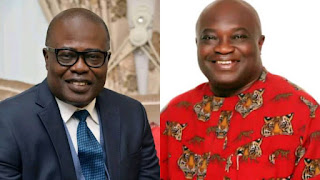 The Provost of Abia state College of Education, Technical, Arochukwu, Dr Philips Nto has expressed appreciation to Gov Okezie ikpeazu for the payment of one year salaries of the staff.

He said the governor has by that action saved thousands of Abia families from starvation as well as preserving the dignity of the men as bread winners.

In a statement he issued shortly after paying the one year salaries to staff yesterday, Dr Nto described Gov ikpeazu as a compassionate leader who cares for the welfare of the citizens.

He said the governor’s magnanimity had manifested in various interventions that made it possible for the college to stay afloat in midst of daunting challenges.

The Provost noted that the one year salaries paid to the staff will reinvigorate them into greater productivity.

Dr Nto pledged the loyalty and support of the management, staff and students of the college to Gov Ikpeazu.

He urged the staff to reciprocate the good gesture of the governor by being more productive and committed to their duties.