Members of Nzuko Arochukwu, New York/New Jersey and Connecticut, United States have explained the reason for embarking on a state-of-the-art mortuary project as one of its projects in the community, Arochukwu LGA of Abia State.
Speaking with a news agency in the state, the President of Nzuko Arochukwu in US, Engr. Emma Odinakachi said the association was troubled with the dehumanizing treatment accorded to corpses in the community as a result of unavailability of a decent morgue.
Mazi Emma Odinakachi explained that his wife was moved to tears sometime around 2018 when she travelled home and discovered how corpses were littered on the ground in the only morgue in the community.
Engr. Odinakachi said members of the union rose up and decided to pull resources together to ensure that corpses are treated with decency.
“I had to travel to Nigeria and met with the Abia State Hospital Management Board Director, the then Commissioner for Health and we requested for a piece of land in the Arochukwu General Hospital which was approved late 2018 and that was when we commenced the project” he said.
The project which is currently ongoing according to Engr. Odinakachi will enhance the sanitary condition of the community, create employment, give respect, decency and love to departed ones.
Mazi Anicho Okoro
(Executive Secretary Nzuko Arochukwu NY/NJ/CT)
He added that the project has the capacity of spurring other town unions from Arochukwu to make sure they bring development to the community and Abia in general. 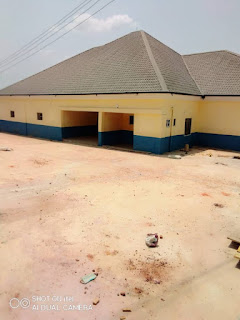 Aro Okeigbo Blog gathered that the project has a 200 corpse capacity and equipped with modern equipment as well as a high capacity generator that will ensure constant power supply.
It is expected to be commissioned and handed over to the community in December 2022.