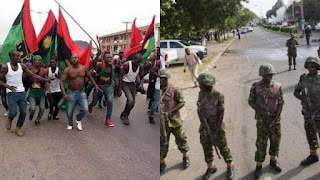 Not less than four people were yesterday feared dead in the Oror Axis of Arochukwu Kingdom as  security agents clashed with  the Indigenous People of Biafra (IPOB) during a peaceful protest.

According to report, the proscribed Indigenous People of Biafra stormed Arochukwu Community to protest for the freedom of Biafra and for the immediate release of their leader Mazi Nnamdi Kanu. 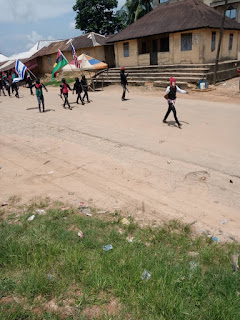 Generally, 21/10/2021 was a day mapped out by Nigerian Government for the retrial of the leader of the Indigenous People of Biafra; Mazi Nnamdi Kanu.

In accordance with this, some of the members of IPOB decided to carry out a peaceful protest within the Arochukwu community to also commemorate with their leader.

According to an eye witness, they entered the Arochukwu community through the amuvi axis progressing gradually to other parts of Arochukwu villages until trying entering the Ime Aro concordat. 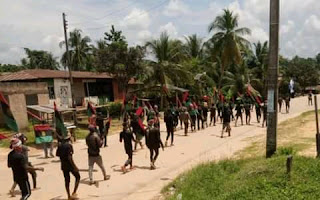 A report our correspondent narrates that at least four members of the proscribed Indigenous People of Biafra (IPOB) lost their lives when the soldiers at Arochukwu first bank opened fire on them.

READ ALSO: IPOB Bans the Rearing and Consumption of Hausa Cows in the South-East Arochukwu Not Excluded

It was gathered that the open gunfire that the soldiers opened on the protesters on arriving the First Bank axis of the town created a huge tension and scamper around the palace of Eze Aro extending to other near by villages.

According to the video posted by Aro Okeigbo Blog IPOB members marched the villages of arochukwu in a jubilant mood when they heard that Nnamdi Kanu is alive, following to reports about the safety of the freedom fighter.