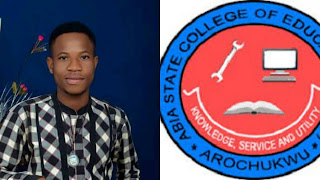 Comrade Ikokwu Christian, The President Student Union Government of  Abia State College Of Education Technical Arochukwu has suspended the college student week which was slated to commence from 15/11/2021.

The indefinite suspension of the students week followed an illegal impeachment imposed by the Speaker on the President over false accusations of mismanagement of student fund.

READ ALSO: About The Arochukwu Waterfall

The sudden Impeachment has left many talking as some said that the speaker is acting out of intoxication of power.

Read The Impeachment Notice Below,

NOTICE OF IMPEACHMENT AND REMOVAL FROM OFFICE.

Pursuant to the provison of the constitution of the Students Union Government of Abia State College of Education (Technical), Arochukwu, Article XXI 1. (a) (b) (c) (d) (e) (f) (g) 2. (a) (b) (c)., the SUG president, Comr. Christian Chineye Ikeokwu, has been impeached and removed from office after been found guity of the following gross misconduct and office violation:

1. Embezzlement of SUG fund with the Dean of Students Affair, of almost half a million naira following numerous unauthorised bank withdrawal and non-approval by the SRC/Speaker, as against Article XIII, Sub – Section II (e).

2. Further misappropriation of fund through making unauthorised withdrawals on resumption of office on the directives of the Dean Of Students Affairs to

offset bills not related to the UnIon. As against Article XIII, Sub – Section II (e).

3. Refusal to pay all the union members of their allowances, whether half or full since the beginning of the current administration till the time of this impeachment proceeding on the calm of lack of fund, even after the students paid their SUG fees. This is against Article XIII, Sub – Section 1.

4. Refusal to present the first semester SUG budget and  unauthorized bank withdrawal within this period as against Article XIV (a) (b) (b) (d), Article  V, Section II (2), Article VI (2).

5. Unauthorized several withdrawal of journey allowances without approval by the SRC as against Article XIII, Sub – Section II.

6. Thus, today 11th, November, 2021, in pursuant of the provision of our constitution in relation to the above constitutional breaches, embezzlement of union fund and gross misconduct in line with Article XXI, after due constitutional procedures, the guilty president Comr. Christian Ikeokwu Chineye is hereby impeached and removed from office as the executive president, Student Union Government of Abia State College of Education (Technical),  Arochukwu.

7. In line with Article  XXII

The Impeachment Notice which left many tongues wagging on social media has turned to be void as the President continued to play his roles. He has indefinitely suspended the college student and asked them to return to their various faculties for continuity of academic activities.

The Students’ Week activities that is scheduled to commence tomorrow 15/11/2021 is hereby suspended for now till further notice.

SUG fee or Rag fee till the issue in the SUG body is ratified.

#Note: For those that have paid thier Rag fee, be calm as your money will be refunded to you by the person(s) you paid it to.

Thanks and remain great students