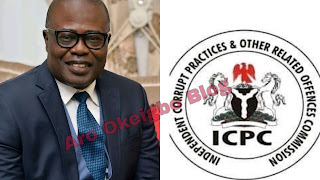 An Abia state High Court sitting in Umuahia presided over by Justice Thompson Adiele yesterday cleared a former Commissioner for Finance in the state, Dr Phillips Nto of corruption charges levelled against him by the Independent Corrupt Practices and offences  Commission (ICPC)

The court held that Dr Nto was not guilty of the three count charges preferred against the former Commissioner as the prosecution failed to prove its case.

Dr Nto, Consolidated Business Network and its managing director,lkechukwu Onu were charged for engaging in corrupt practice through the refund of excess charges on Abia state funds by the Keystone Bank.

However,in his ruling, Justice Adiele held that the former Commissioner was not found guilty of engaging in corrupt practice as outlined in count one while charge two which bordered on conspiracy to confer undue corrupt advantage on an associate was not tenable since it could not be proved that the second and third defendants were associates of Dr Phillips Nto.

On the third count of making false statement to former Abia state government on the amount recovered from Keystone Bank as excess charges on the Government’s money, the court held that the former Commissioner was not guilty because the signatures on the contentious documents were forged.

According to the judge, a hand writing expert had  testified in court that letters said to be written by the former Commissioner engaging the consultant and authorising keystone bank to pay them money were forged.

He said the signature expert confirmed that those letters were not signed by Dr Nto and therefore  the former Commissioner could not have engaged in corrupt practice.

The court however ordered that both the second and third defendants should pay back the sum of N550m to Abia state government within 30 days of the judgment.

He said it was wrong for them to have collected N700m from Keystone Bank only to pay a paltry N150m to Government in the name of Commission.

Speaking shortly after the judgment,Dr Phillips Nto told reporters that he had been vindicated by the court.

He demanded an unreserved apology from ICPC within 48 hours for tarnishing his image in the few years that the case lasted.

Dr Phillips Nto said he served the state honestly and diligently and expressed regret that some people out of envy decided to collude with ICPC to ruin his reputation.