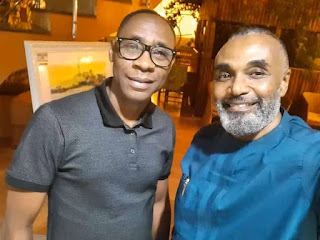 Mazi Iroy Orji revealed in a post on his social media page that he visited his brother and former Local Government Chairman but did not disclose the outcome of the meeting, he noted that the meeting was fruitful.

He did not reveal the details of their meeting but urged us to keep hope alive.

After a fruitful meeting with my brother, the former Executive Chairman of Arochukwu Local Government Hon. Chibuike Jonas.