Arochukwu Lady Shares What Her Husband Told Her Before His Death 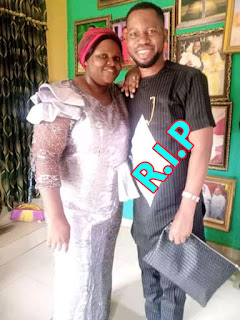 One Mrs. Morgan Ngozika has taken to Facebook to show her grief towards the demise of her husband and disclosed a vital information that he left her with before his last breath.

The late husband who is believed to be a well know evangelist in Arochukwu Community has left many shocked as several of his pictures are now tagged with R.I.P and so many other heart touching write-ups on social media.

In her write-up she disclosed that in her 24 years, she is now left to be a widow which got many reacting with crying emojis.

Mrs. Morgan the wife of the pastor penned down some vital information her husband left with her before his final breath.

“Before my husband passed on ….he told me lots of things but one has just been ringing in my Head…

He said, ” Elijah left before Elisha was heard” Don’t stop doing the work of God even after I am gone😫😫.

It’s just so hard to cope, it hurts to my marrows, the imagination of being a widow at the age of 26😭😭😭😭💔

But I am consoled in the Lord.

To everyone who texted and called I truly appreciate from the bottom of my heart…. CHIMEZIE IS DEAD BUT CHIMEZIE LIVES., LET ALL OF US BE CONSOLED, HE FINISHED WELL AND HIS IN A BETTER PLACE

Ministry continues……WATCH OUT FOR ELISHA…

Following the demise of the Arochukwu popular pastor some fans have penned down some heart touching tributes.

One Mr. John Kelly has described as a father and mentor to him.

You’re like a father to me. You’re also like a brother to me. The 4 years we have come to know each other were one of the best years of my entire life. I still can’t believe you’re gone but we can’t question God. When I remember that as we humans, not everyone is meant to stay in our lives forever, I feel consoled because it’s a fact we can’t change. Even at a very young age, am happy you lived a fulfilled life.

Some days are just bad days, that’s all. You have to experience sadness to know happiness, and I remind myself that not everyday is going to be a good day. That’s just the way it is.