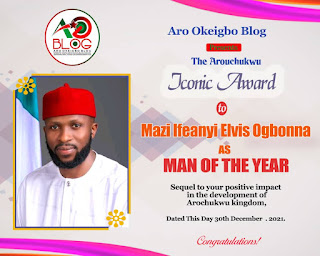 Mazi Ifeanyi Ogbonnaya was on 30th December 2021 awarded with a meritorious award following his numerous achievements in building and helping the less privileged in Arochukwu L.G.A.

Mazi Ifeanyi who was nominated for the Award after numerous scrutinization and inquiry merited to be honored and awarded with “Man of the Year” during the Arochukwu Iconic Award.

Speaking while receiving the award, Mazi Ifeanyi thanked Aro Okeigbo Blog for recognizing him, noting that he will continue in doing his best to aid and support lives in Arochukwu Local Government.

Mazi Ignes who was nominated for the award following his numerous scholarship schemes, hosting Aro football league, providing of food item for the less privileged, giving out smart 4g phones to both aged and young residents of Aro L.G.A to boost and support Commendation and sharing of wrapper to windows was found worthy for the award. Mazi Ogbonna Used the medium to charge the youth of Arochukwu L.G.A to engage in Politics and participate in the ongoing Permanent Voters Card Registration process thereon he elited the public that their PVC is their voice and that they shouldn’t relent after registering for it but to come out in Mass to deliver their mandate.

He also reminded the people that vote count, if not, there won’t be vote buying.

Therefore, to achieve this we have to be vigilant to stand and watch them count our votes in our units which is Paramount in getting our preferred candidate come  2023 election. The Arochukwu Iconic Award man of the year showed dissatisfaction in the state of infrastructure and roads in the Arochukwu Local Government noting that the state of roads in the Aro L.G.A will discourage and hinder the successful running of various businesses in Aro.

He pointed out some roads, tourists sites and Government structures that are in dilapidated state, which when taken care of will help in generating fund for not only Arochukwu Local Government but the state at large.

The Award which was presented by Miss Arochukwu Creative Winner, Adamazi Jovita Okoronkwo used the medium to thank Mazi Ogbonna for his helping nature towards the Aro People and charged him to continue his good works and pay less attention to gossips and unsatisfied individuals.

Comr. Ikenga Justice the Managing Director of Aro Okeigbo Blog described the award as a meritorious award, noting that among all dignitaries in Arochukwu he stood out bold and touched lives in the year 2021 and beseeched him to do more in the coming years which will gets him bigger awards.