2023: Iroy Orji Meets With Team See What They Discussed 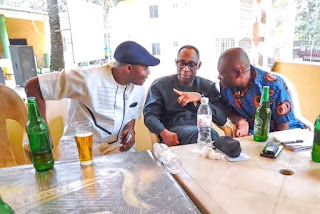 Mr. Iroy Orji an Arochukwu born business man was on Feb. 18 met with some of his team ahead of 2023 general election.

The Aro Okeigbo indigenous politician who disclosed this on his Facebook handle, noted that the meeting was held in Abiriba and not in Arochukwu.

He stated that the aim of the meeting is to plan and get ready for repositioning of his Constituency.

Earlier today I was in Abiriba to meet with some of our team, as we get ready to reposition our Constituency.

Note, that Aro Okeigbo Blog has earlier disclosed that Mazi Iroy is likely to join the 2023 general election, though yet to officially declare.