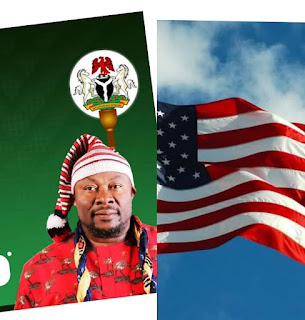 The resident of Hon. Eke Fred Idika in Washington DC, America was agog when Arochukwu-Ohafia residents in America paid him a courtesy visit . The group, ably led by Chief Kalu Uma ( Offia Afu Agu of Asaga Ukwu, Ohafia ) pointed out that they were in Washington DC to show their sincere love and support to Hon. Fred Eke Idika (Ekwueme Ohafia) as the 2023 general election draws nearer, he pointed out that Arochukwu-Ohafia Federal Constituency needs a kind and a gentle man like Hon. Fred Eke Idika to speak for the Constituency at the Federal House of Representatives in 2023. In his remarks . Mr Okey Onyema pointed out that , one of the major reasons the group is solidly standing by Hon. Fred Eke Idika is because he is a man who has been tested and trusted with a leadership position. Mr Okey Onyema stated that when Hon Fred was the Transition Committee Chairman for Ohafia LGA, he tried as much as he can to bring about developmental strides in the council , in his contribution, Mr Nduka Ukaoma pointed out that with the exposure and contacts Hon. Fred Eke Idika has, he will surely use it for the best interest of Arochukwu-Ohafia Federal Constituency and the needed development will come about ..He also stated that they have started making plans to come back to Nigeria and vote in 2023 general election especially as it concerns Arochukwu-Ohafia Federal Constituency as mobilization is already ongoing

In his response, Hon Fred Eke Idika ( Ekwueme Ohafia) thanked and appreciated the group for finding out time to come and associate with him, he promised to keep on doing the much he can do to project and promote the best interest of Arochukwu-Ohafia Federal Constituency.