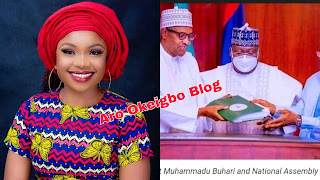 In an online interaction between the female aspirant and Aro Okeigbo Blog, she disclosed that the amendment bill signed by president Mohammed buhari will help in curtailing the rate of electoral manipulations and social vices during election.

During the online interactive section, the female journalist disclosed to Aro Okeigbo Blog that Election rigging and other form of electoral manipulations started since 2014 including box snatching which the newly implemented bill says nothing about.

Mrs. Ogbonna went further to note that, the newly implemented bill will help to abolish the case of incidence form which sometimes allow non accredited voters to vote which aids in electoral manipulations.

The Electoral bill as signed by the President is not a New Law but only slight improvement on the existing one .

The only beautiful thing about it is that it will abolish the case of incidence forms which sometimes allow Non accredited voters to vote giving room to all forms of electoral manipulations.

But sadly , Election rigging had since 2014 gone beyond Box snatching And all what not and had degenerated to “VOTE BUYING” and the New Electoral act didn’t clearly state Anything about that!

So while I commend the Legislators and the President on the New Electoral act, I sincerely do not think it can put an end to other forms of election manipulations like Vote Buying and other forms of intimidation.