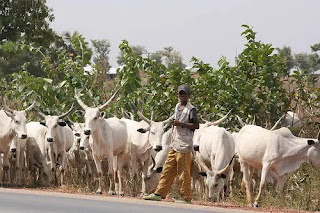 Mazi Chika Edoziem DOS Indigenous People of Biafra (IPOB) has banned the rearing and Eating of hausa cows in the South-East region.

IPOB Head of Directorate of State (DOS), Chika Edoziem, made this known in a statement on Saturday 9/10/2021.

He added that only ndi Igbo local breed would henceforth “be consumed and used for all ceremonies in Biafraland.”

According to him, “from April 2021, no more Fulani cows shall be allowed into any part of Biafraland for any reason, not for burials, title taking, weddings, child dedication, end of the year party etc.”

He noted that the ban followed constant attacks by fulani herdsmen on their people , resulting in killing, raping of Igbo women and other forms of human assaults.

This News is coming after the meeting of 17 Southern governors led by Rotimi Akeredolu of Ondo state in Lagos on July 5, 2021, and “set a timeline for the declaration of the anti-open grazing law in all member states”.