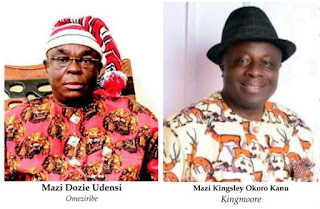 While the observations are  being  collated and will be  addressed  in  due course, l et me say  for now  that 14b was included in  error as it contradicts 9 which emphatically states  that the  National Patrons  shall not vote.

I am fully persuaded to make the following observations on Nzuko Aro Electoral Guidelines presented by the Electoral Panel:

1. We must be careful in not producing a new constitution under the guise of a guideline.

2. A look at No.12 of the guidelines, portrays a premeditated intent to disenfranchise some

3. The idea of sending aspirants to another aspirant to get a clearance certificate as contained in Article 12a of this guidelines in itself shows that the Electoral Body had compromised their duties and deliberately erred since the Financial Secretary General may also be an aspirant himself and as such we cannot be seen as fair on the neutrality of the Electoral Team. Even the deadline introduced are all meant to expose the voter/delegates for the wrong reasons. Of course on Election Day every nominated contestant must belong to a branch to stand election as cleared by the said branch. No individual is responsible to the National without its branch.

4. Article 13 of the guidelines is a aberration in that it forces aspirants that is not in power to go cap-in-hand to other aspirants in the current Exco to be cleared by them, except it is collusion. It is wrong.

5. Article 14 of the guidelines. Categorization of Villages and Branches is a constitutional issue and not for the Patrons or the National Officers to decide. It is not a function of money donated or contributed to National.

6. Article 14a cannot not be a decision of the National Officers, Patrons or Electoral Team members, such decision must be a General Assembly matter except it is intended for other reasons during the election. Also note that Calabar is Category B branch while Abakaliki is Category A branch. It is quite understandable that some branches are almost going extinct but then, sometimes, it’s also the fault of National Officers for abandoning those branches and not ask about their welfare but if they still meet, they have to vote to encourage them rather than disenfranchise them. Is it not the duty of both National Officers and Patrons to look after ailing branches.

7. Article 14b is another unacceptable guideline because at the time of election proper, there’s no National Officer standing because the house must have been dissolved hence none of them can vote except as delegates of a branch or village. Even Patrons cannot vote because they’re charged with election matters by the constitution.

8. Article 15 of the guidelines is correct but Article 15(a) is a historical fallacy because even the current National Officers came into office with the votes of villages. This Historical perspectives being brandished will simply import the same divisiveness that virtually destroyed Nzuko Aro Women’s Wing. To be very factual this whole effort of the guidelines are laying a strong foundation for a divided Nzuko Aro. For those who do not know, kindly find out the reasons behind Women’s Wing problems that nearly consumed our women.

9. Article 15(b) is really sad to be found here. I won’t be surprised if some people have stored up cash to pay for villages as a means of vote buying. We have to really have a rethink on the kind of foundation we’re laying in Aro. We should not forget that Umu Aro has been up and about on all issues in the kingdom, raising all kinds of money even at a short notice. However you look at it, those monies came from Aro and her villages, to disenfranchise a village on account of money, is to deliberately creat problems with this  election.

10. Article 15(c) is a General Assembly matter as the Patrons lack the authority to impose such heavy burden on the villages let alone Three Man Committee called Electoral Team.

11. Article 16 of the guidelines which imposes N20,000 to Clubs is also a business of the General Assembly not Patrons.

12. Article 18(a) please note that President and Secretary signs the delegates list of their branches while Ezeogo or Arianzu (as the case may be) and Village Union PG signs for their villages, not the PG and Secretary of village Union. This has been the standard, anything contrary will amount to undue manipulation of the election.

13. Article 18(b) will amount to issues which will mess the election. Both the Chairman and the Secretary of the Election Team have been very seasoned in this aspect of our Nzuko Aro Kingdom service and they know that such delegates list is usually supplied directly on the Election Day. The idea of requesting that such names be exposed is very dangerous since it’s an open ballot where voter openly stand up to vote. Threatening to reject list does not arise since it is usually submitted on the morning of election.

This whole efforts of setting these guidelines are at best a landmine that if allowed to detonate, will create another round of discord in the kingdom, please let’s try and avoid it.

In 2016 when this present current Executive of Nzuko Aro came into office, there’s no such thing as guidelines and the election was free, fair and very credible, also in 2019 there’s also another election and again there was no such thing as guidelines but it follows the usual constitutional norm in Nzuko Aro election. My question is “what changed?”

Why all these carefully crafted guidelines that even contradicts the extant constitution, with so much impunity, these are strangers to the constitution itself and Umu Aro who are familiar with the workings of Nzuko Aro know  that.

Nzuko Aro election shouldn’t be treated in the same manner as political parties contest and shouldn’t be considered as one. We are Umunne na Umunna.

I have a moral obligation to speak out and I come in peace. For purposes of benefit of doubt I had made contact with only members of the electoral committee who signed the document.

Please as usual ,let the election be fair and free ,Let the constitution be followed to the letter ,electoral guide lines as has been observed ,looks like indirect amendments to the constitution before the election .As in the case of women wing ,that was the demand .Before the election in April ,many still believe that there will be a documented financial report . The question and answer between NPR vs NU was a good one ,but what I found difficult to understand if NPR was collectively or an individual represented NPR  because their the sound of their voice as electoral umpire sound too compromised .Please I pledge for calm and peace before ,during and after the election ndewo nu

Nwannenkem juwakwawo. All this came up because someone challenged or queried what he saw as discrepancies in the elections guidelines.  Incidentally, Prof. Okoro Ijoma, a man with a proven pedigree also accepted that there was an error, and he pointed one out as error.  I thought the most important thing should have been to revisit the guidelines so that none of the candidates is disadvantaged in favour of another. Unless we go back as umu Aro and peruse those guidelines with open mind, having a free, fair and transparent election will remain an utopia and we don’t want that to happen.  We can’t be keep quiet now otherwise it would be too late to talk after the elections.  We should approach all this with a very open mind to ensure we bring in executives that will be very accountable, reliable and dependable.  No lapses in guidelines that may be interpreted as Prof. Chike Obi’s 12 and 2/3. No, nde Aro MUST guard against such. Blessings.

1. Item 2; In as much as the Constitution confers on the body of Patrons the power to conduct elections, the body should ensure that those appointed as Electoral officers are not interested parties and not directly linked to any of the candidates. If any such link is identified, the officer so affected should be replaced.

2. Item 7; Voting by show of hands is sometimes confusing while counting. And the statement, “or in such an open manner ….” is not specific. For transparency, voting should be by open ballot system. Voters should queue behind their candidate or their candidate’s symbol.

4. Item 15a; If the villages decided to come together as Home branch, and have remained so for over 28 years, encouraging separation for the purpose of the election is unhealthy and suspicious. Any villages that felt capable of standing alone and carrying the financial burden should wait until after the election to formalize that. Therefore, 15b should be discarded. It is an indirect way of introducing money politics into the system. It also appears to be targeting or designed to favour particular candidates from category A villages. We cannot pretend not to know, by now, the candidates and their villages. In an election of this nature, one vote makes a lot of difference.

You are not just on point but has been emphasizing it.

Let me say here that I not that I valued Aro good above this current politicking, I would have been challenging the Committee in the open with what I know, sure of and have proofs of.

I came out first as independent candidate but have to team up later because so many heavy weights were behind Team Ezuma.

I campaigned, spent and sold my ideas and intents by far more than my opponent but his team was annointed  to take over the leadership of Nzuko Arochukwu Union.

Of course I was not happy with some roles played by the Electoral team, but the fact that Mazi Sam Ohuabunwa showed respect for my last objection to the Electoral guidelines and reverted in line with the Constitution, helped me to abandon any thought of going to court.

Six years down the line I expect the electoral Committee to be above board.

I have decided not to challenge their regulations(guidelines) which two are suggestively biased by hard facts I still have and can call witnesses, but they (Electoral Committee) should clearify issues surrounding qualifications to vote by making public this month the financial delinquencies of branches and other stuffs people want to be clear about.