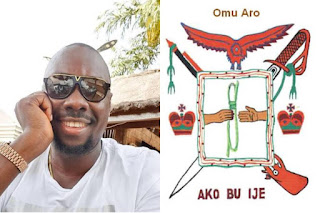 An argument has emerged online after the burial ceremony of Obi Cubana mother, many have said that the reason why Obi Cubana is making wave all over the country is because of how many people that have become millionaires through him, some said that a real big man is measured by the number of people that became big man through you and not the number of cars, houses and investment one may have. 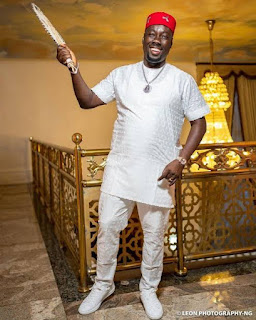 Obi Cubana is one of those big man who has made millions of people millionaires through his aided supports and materials, merely three days after he gave her late mother a befitting burial he empowered 300 Oba Youths with the sum of one million each which is approximately three hundred million.

Following all these, Obi Cubana has gotten so many people talking to an extent of comparing two communities together who may also have people like Obi Cubana but will find one excuse or the other why they will not help his brothers.

Coming to our kingdom, Arochukwu indigenes stressed that Arochukwu have people that are richer than Obi Cubana, but cannot help the upcoming ones. Some even shared their various community stories, how big men’s do send them away, when they go to seek for sponsorship.

Some said when you meet them for help, they will tell you that you a smoker and would be hard for a smoker to utilize capital very well, some will tell you that they have not paid their children’s school fees, some will say that they had you’re a womanizer, as a matter of fact you hold a vital post at APGA as their regular customer and so many more. Arochukwu youths have stated their grievances towards how people who should helped them do send them away with one excuse or the other. One of the agitators stressed that, the big men’s should help them first let alone they misused it and not giving the unnecessary excuses all the time.

All these led one to openly pen down some points about Arochukwu and Oba, Read below,

Well the truth is that they are many great Aro Men that even made Arochukwu what it is  today, at least that is still wiping out our shame because much is expected from the Anciet Kingdom of Arochukwu, even If we are very far from where we are supposed to be.

People like Mazi Dagogo, Mazi Lawson Obasi, A.K.A Sobaz, Alex Otti and many others that have done noble to see that Arochukwu moves on.

But the truth be told, Aros of this generation lack Love of empowering their brothers, that is the truth, apart from Atani that we have some few consistently performing, Amuvi at a times was at that until those they helped kept the help for themselves, other village many of those that have capacity will rather see their cousins and relations suffer like people who has nobody to climb when some finally climb by self determination and God they repeat the circle because of what was done to them .

The truth is not about the deed of Cubana you can’t compare Anambra people in this generation with Arochukwu people never we either learn from our Ancestors who the Anambra people are replicating their love and action that made the name Arochukwu we are enjoying  today or we humbly learn from Anambras we have bigger capacity that where we are in the league of Igbo affairs.

And finally Aro celebrate people that have not done anything tangible and that is why we are encouraging men that cant match a night club man in human resources development when we have men in their thousands that can do more than that, its  a wake up call Human capital development should be like competition now going forward as a yardstick of recognition in Aro and not continuous awarding of Ugwu Aro and Ikenga Aro that cant help those around them.