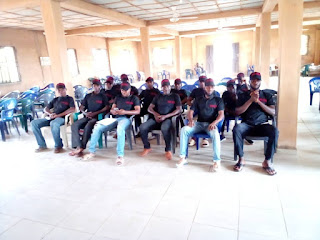 Speaking during the inauguration at Ugwuakuma Hall, Arochukwu, Hon. Ukoha, urged members of the vigilante to always remain good ambassadors of Ugwuakuma village  in particular and Arochukwu in general.

He explained that security remains the duty of every body, considering the security situation in our society today.

The Lawmaker advised the members to always ensure they interface with officials of the Nigerian Police Force in Arochukwu, for effective community policing.

Hon. Ukoha, used the occasion to donate huge sum of money to kick start the Ugwuakuma Vigilante Trust Fund (UVTF), in a bid to make them more proactive. 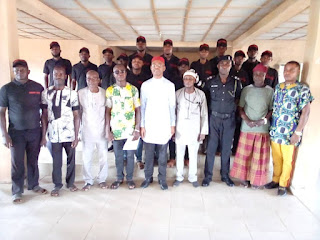 Earlier in his address, the PG Ugwuakuma Progressive Union, Captain Eugene Okey Imuoh, advised the newly inaugurated members of the vigilante, to always follow the rules of engagement in their services to the community.

He noted that they will be humiliations, insults and other undesirable things from the people just to demoralise the members from their assignment, but urged them never to relent in their services.

He advised the members not to take laws into their hands in the course of their duty.

CSP Okochi, assured them of his willingness to always partner with them in a bid to achieve a crime free society in the area.

He thanked Hon. Ukoha, and Captain Imouh, while praying God to bless everyone.