Destination Abia North World press conference. 08-03-22
Good afternoon Ladies and Gentlemen of the Press.
This press conference is one in a number of series to come, specifically tailored to warn those whose duty it is to make political decisions in the state to eschew pettiness, narrow-mindedness, nepotism, favoritism but embrace classical selflessness that is required of leaders. Leadership is sacred and given by God, thus; those in Leadership positions should live above certain primitive considerations.
We, the young people of Abia North under the aegis of DESTINATION ABIA NORTH 2023, have watched with dismay how some of our supposed elders and leaders drift away from the maturity, emotional and behavioural standards expected from people of their age and status. Our founding fathers didn’t reduce leadership to this abysmal level of parochial sentimentalization that we see in our today’s elders and leaders. It is a shame to say that, our elders who have lived past their prime in peace are today determined to destroy the time of the youths and the future of Abia’s next generation. If this senselessness continues unabated, the young people shall rise to the occasion and correct the perceived anomalies. Our today’s leaders and elders must address this shameful path of ignominy. A certain sage once said “Because we can, doesn’t necessarily mean, we should”, The express interpretation means that we should exercise restraint in taking actions no matter the powers at our disposal. We are all privileged to be Abians and nobody, no matter the office they occupy now or once occupied can be more Abian than another. We can no longer fold our arms and watch our elders and leaders plunge the state into crisis or unnecessary carnage. If any example is to go by, we should take a cue from our sister state in turmoil and enmeshed in endless political crisis. A close observation will reveal that while their elders and leaders brought the political crisis based on their personal interests, it is the young who continue paying the ultimate price with their lives. Abia youths will not allow such political destabilisation to happen in our state.
Abia State has operated a fair political system which has ‘widwifed’ peace and security in the land. We, the young people of Abia North implore all political actors, elders and leaders to follow this pattern that has worked and not return us to dark days of mindless blood- letting, insecurity and instability. In today’s political delimitation, the Senatorial zones have replaced all other ancient forms of sharing,  demarcation or colonial formula which are no-longer consistent with today’s reality.  Abia State as at today is politically divided into 3 Senatorial zones like every other state in contemporary Nigeria. The states in Nigeria all operate the modern senatorial zones, thus; Abia State will not stagnate itself in the past with outdated divisions of ancient colonial era. 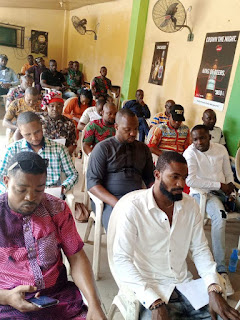 Abia North, Abia Central and Abia South are the only known political delineation that is acceptable. We therefore demand that the political sharing formula that has brought peace in Abia should be maintained and nurtured. The governorship rotation cycle which flows from Abia North to Abia Central to Abia South must not be broken under any guise. The rotation must return from where it started and shall keep flowing for our generation and the generations after us. We shall vehemently resist any attempt to break this cycle that has brought so much political peace and stability in Abia state. No parochial sentiment, no sectionalism, no segmentalism, no consideration is more important than the peace we enjoy in the state.
If Bayelsa state of only 8 local government areas can produce a president for Nigeria, if Obasanjo became President even when his region all supported another political party; it will be foolishness for any to seek for reasons to deny Abia North what is rightfully theirs in 2023. Our founding fathers introduced the charter of equity to allay the fears of dominance of one Senatorial zone over the other. They believed in fairness and equal opportunity for every Senatorial zone, it will be invoking the wrath of the gods if anybody will use population, or support for a particular political party to deny any zone what is due them. Abia must erase all those things that divide us.
From 1999 to 2007, providence/fate brought Senator Orji Uzor Kalu as the Governor of Abia State from Abia North. From 2007 to 2015, Senator TA. ORJI became Governor from Abia Central. From 2015 to 2023 by grace of God, Dr. Okezie Ikpeazu for Abia South. It is only proper that this trend be sustained and nurtured. Abia North should be allowed to produce the next Governor and afterwards the central Senatorial zone and the South. LET US NOT BREAK THE CYCLE.
Abia North has men and women capable of leading a united and more prosperous Abia State for another 8years. We have the population and we have the votes. Aba North and South, some parts of Obingwa and  Osisioma local government Areas are dominated by people from Abia North. Let us not be confused, beclouded by ethnically motivated sit-tight-syndrome or by any erroneous permutation to deny nde Abia North their second turn at producing the next Governor for the entire state.
We therefore call upon all our leaders of good conscience, all our elders of impeccable morals to come out to defend our right. We particularly call upon Senator Mao Ohuabunwa to lead this pressure group to ensure that Abia North is not denied this opportunity because of unfathomable and lame excuses. Our choice of Senator Mao is simply because of his eloquence and bravery when it comes to speaking truth to power. We shall keep pressuring Senator Mao Ohuabunwa till he accepts to lead Abia North in the struggle of producing the next Governor of Abia State.
Finally, We also call on all our sons and daughters of Abia-North living outside the state to come back home, those who recently turned eighteen (18years), those who have not registered to vote before; to take advantage of the ongoing voter registration exercise and get registered. Similarly, our brothers and sisters living and doing business in the southern Senatorial zone of the state, to remain there and cast their votes; this will demonstrate our numerical strength even in their self- acclaimed strongholds of Aba North and South, and Osisioma local government areas. 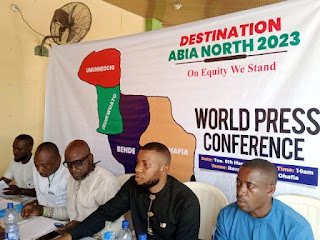