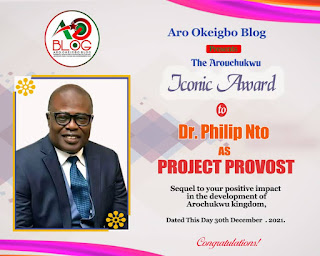 The provost and 001 of the Abia State college of Education has been recognized at the Annual Arochukwu Iconic Award following his gigantic moves towards actualizing a greater ASCETA.

The provost who was awarded as “Project Provost” is inline with the ongoing and already completed edifices in the college vicinity which has helped the college ranked 3rd in infrastructure among other tertiary institutions in Nigeria.

During the Award ceremony the provost disclosed that his administration will never relent in facilitating anything that will help the college to attain more heights in education and creating a conducive environment for both learners and workers.

The Provost who was represented by the Dean Student Affairs used the medium to disclose that the School Fees for every Arochukwu indigen has been slashed to #20,000 instead of the usual #40,000, he used the opportunity to charge every Arochukwu Indigene to use this great opportunity and acquire an advanced certificate in Education before the present administration leaves office. The provost noted that out of his love and zeal for Arochukwu indigenes to acquire advanced certificate in education, he did not only slashed the school fees but removed the fee for purchase of form for the school admission.
The CEO and founder of Aro Okeigbo Blog, King Nnadozie Victor described the provost as lover of quality education and beseeched him to never relent in bringing more positive changes to the college.

The CEO who presented the Iconic Award described the provost as not only the lover of quality education but promoter of entrepreneurship among youths who has the interest of the youth at heart.