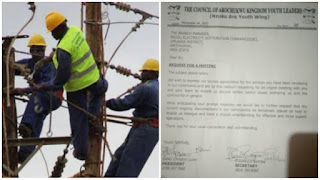 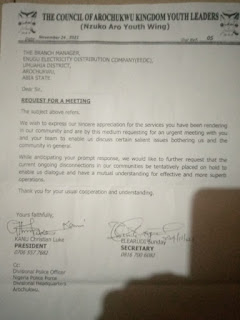 Sequel to the above, the Arochukwu EEDC manager Mr. Chinomso complied with the request and called for an urgent meeting with the Arochukwu Kingdom Youth Leaders on November 26, 2021. The meeting which was held at Ndi Umeham’s compound Amannagwu village has the following group/personalities present; the Executive members of the Arochukwu Kingdom Youth Leaders ably led by the President, Kanu Christian Luke and his members, the Managing Director Aro Okeigbo Blog, the Army Commander in charge of Arochukwu, Mazi Okechukwu(Mayor of Grace garden) and the Manager of the EEDC(Chinomso Nnubuagha) and his team. 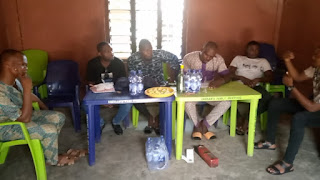 The Youth highlighted the aforementioned challenges plaguing the Arochukwu Kingdom and asked the EEDC manager to react to them and then articulate areas he thinks the Youth Leaders could be of help. The manager responded accordingly and attributed their challenge mainly to the source of supply at Itu but assured all and sundry that arrangements had already been put in place by the company to put an end to the problem as soon as the rainy season is over as the source is almost not very accessible at the moment. 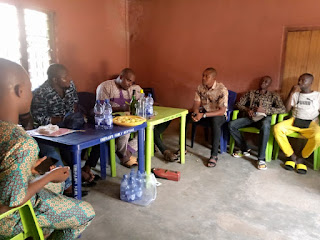 However, after the response of the Manager, the Youth Leaders proposed the following as ways the present challenges faced by the Kingdom could be ameliorated. They are: 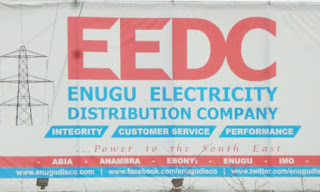 1 Deployment of prepaid meters to Arochukwu.

The manager addressed each of the proposals presented and stated why they may be difficult to actualize at the moment except the BULK METERING SYSTEM. However, for the BULK METERING SYSTEM, the Manager said he had already discussed it with the Electricity Committee but never got any feedback till date. The clause with this system (bulk metering) according to the Manager is that all the outstanding bills must be cleared before the meters are deployed. 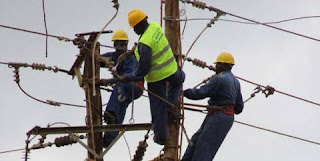 We unanimously agreed that we would present the Bulk Metering System to the stakeholders in the Arochukwu Kingdom and then revert to the EEDC but charged the Manager to ensure power is restored in the shortest while. In response, the Manager assured all and sundry that before the close of business we would have power supplied as they were already working on it.

The meeting ended on a very good note with the Manager expressing firm commitment, assuring the Leaders of his readiness and eagerness to always cooperation and collaborate with them to improve on their service delivery while the leaders in return expressed their willingness to give their maximum support whenever the need arises.