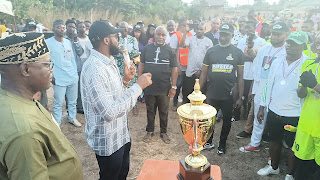 Asaga village, on the 2nd of January, 2022 emerged the winners of the maiden Ignes Ogbonna Football Competition.

In the final match played before a capacity crowd at the Abia State College of Education (Technical) field, Asaga village defeated Amuvi 2-0 to win the trophy as they went home in excitement, joy and rejoicing over the victory. 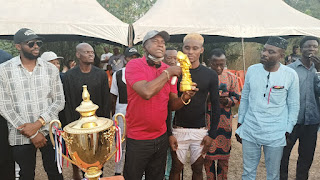 The competition which is the branch of Ignes Ogbonna Foundation officially kick started on the 18th of October, 2020 with a total of 17 villages registering for the competition out of the 19 villages in Arochukwu Kingdom. Amankwu and Ujari did not participate due to one issue or the other. 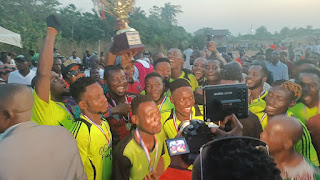 Among the 17 villages that came for the competition grace has found Asaga village as they took the trophy home while Amuvi emerged second position of the competition.

Some of other individual trophies that was won include,

The victory of Asaga village at the Ignes Ogbonna Football Competition came barely five month after victory at the Ikeji Aro day 2021.

We say A huge Congrats to Asaga village as they emerged winner of this prestigious competition.